Brody was so skinny when he came into rescue, you could clearly see his ribs and hip bones, but that did not stop him from wagging his tail upon being released from the shelter. We never discovered why he’d lost so much weight, but after several rounds of digestive enzymes and deworming treatments, he finally began to put it on again. In fact, he gained thirty pounds!  He arrived at his second foster home within hours of their beloved GSP passing. They had no intention of adopting him, just needed to be around some fur and to have something meaningful to do to get their minds off their loss. Feeding Brody every two hours fit the bill. But in the process, they discovered what a sweet and well-behaved boy he is. Thank you, Cheryl & Bill, for fostering Brody, and thanks Anne & Brad, for fostering and falling in love with this guy. Who rescued Whom? 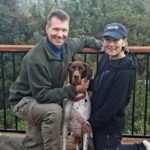 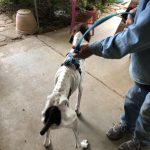 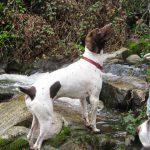