Here’s what to do if your GSP is lost or stolen: Blue was stolen on Feb. 10, 2013 from his owner’s car while they were at church in the Agua Caliente area. A person was seen wearing a gray hooded sweatshirt and blue jeans, with the hood concealing their face. The dog is a neutered male GSP with a brown head and brown and gray patches on his body. He has a microchip, and a 3 inch scar on his left hind leg. He is very obedient. His collar was removed, and ditched on the side of the road. His family misses him very much, and hopes to get him back.

Jake is a 3 year old neutered male GSP. He stands rather tall and has a nice long cropped tail. His liver spots are darker in color. He went missing on Friday 5/18 from the Sonora/Lower Twain Harte area at Longeway/Lucky Strike/Good Shepherd Roads. Jake’s collar came off and he is not microchipped. He does not travel well as he sufers from excessive salivation and vomiting with car/truck rides.

Shasta – Shasta is still missing, it’s been over a year now

Shasta is an 11+ year-old neutered male last seen in Elverta, CA when he escaped from his fenced yard after a gate was left open.  His family misses him terribly and has this to say:

We have had him since he was 8 weeks old, he belong here with us. He has cancer and skin issues that need regular vet care, we are worried about him and want him home so he can get the care he needs. He is not just a dog to our family he is a big part of our family, we just want him home with us. He was not wearing his collar at the time he went missing but he is microchipped so if you have him go have him scanned you will know he is ours. All we want is him to be home with us, our family is devastated and very heartbroken, please do the right thing and return him…we will not stop looking for him as he belongs with his family. Please call (916) 798-6707 at anytime 24/7 if you have information on him.

$5,000 REWARD – NO QUESTIONS ASKED, just return him and you will get the reward. We just want him home safely. Pete is a 3 year old, 60-pound. spayed female GSP with a docked tail. She has a liver mask and a white lightly ticked body. She is larger for the breed but slender and in great shape. She disappeared from her backyard in Sacramento near Don Julio and Elkhorn Blvd. between 4:30 pm and 8 pm on Saturday, April 23rd without a trace. She was wearing a blaze orange remmington collar with a blue bone shaped tag with her name and my phone number on it. Unfortunately, she is not microchipped. She is skittish of people she doesn’t know but an absolute sweetheart and would warm up quickly. We’ve had a few reported sightings of her but none were confirmed so we’re unsure if they were, in fact, her. The first was Friday, April 29th between Watt Ave. and Walerga on Don Julio Blvd. around 2 pm. A neighbor said he saw her running around the neighborhood. The next sighting was May 5th on Elkhorn Blvd. near Rio Linda High School. The caller said she saw Pete with a homeless man on bicycle around 3pm. The next sighting was May 7th and this individual said she believed she saw Pete once more with a homeless man on a bike in downtown Rio Linda between 3 pm and 5 pm. The last sighting we’ve received was May 11th. Once again this caller said she saw our girl with a homeless man in front of a store near Del Paso Blvd. and El Camino Blvd. around 6pm.

Red Bluff GSP – Missing GSP from Red Bluff, CA. Intact male, about 8-9 years. Missing since October 21st. Will be easy for owner to identify. Solid head, liver & tic. Hopefully we will be getting a flyer with picture soon. Owner/Guardian is Mel Hong. Telephone number (925) 200-9835

Here’s what to do if you find a GSP: Found June 5, 2013 near Strathmore off of Highway 65. Extremely thin, was probably on her own for a while. If you believe this is your GSP, please contact ddslrowell@ocsnet.net or call 559-288-5142. 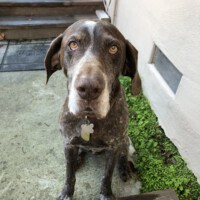 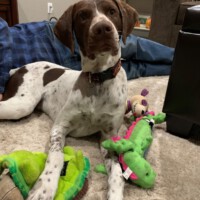