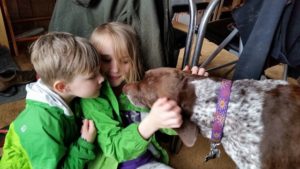 Frannie didn’t get to pick her first family. She was left alone a lot, without even canine companionship. She expressed her dissatisfaction by barking and destructive behavior. She just wasn’t understood, so when her family gave her up to rescue, she decided that she was going to get everything right the second time around. First, she landed a wonderful foster home with Catherine, Mac, and their GSP rescue alum, Colby. Frannie got along with everyone– humans, canines, and all other sorts of animals. But she got especially excited whenever she saw children. They were on her level; they liked to play; they paid attention to her! When a family came to meet her with two children and a young rambunctious GSP–whom she promptly put in his place–she told her foster mom that she would like to adopt this family. The family agreed. Our Frannie won’t have to be alone any more. Her new mom works from home, she has a GSP brother to keep in line, and two kids to adore. There’s nothing like getting a second chance to get things right!