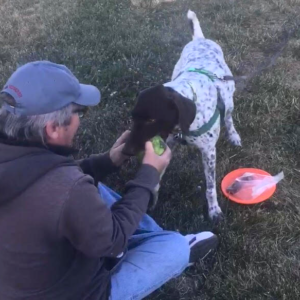 Handsome Gauge came to us in need of a little extra TLC. He had two surgeries to remove four mast cell tumors, and both times he recovered like a champ. Lucky for him, his two foster moms (thanks Desirae, and later Micaela) are both vet students at UC Davis, so he was in very good hands. He’s had great test results lately, but will remain closely monitored in future. Meanwhile, this six year old just wants to play ball, and more ball, and some more ball after that. He is also a champion snuggler who adores his people and gets along great with other dogs. We wish him luck and loads of tennis balls in his new forever home.