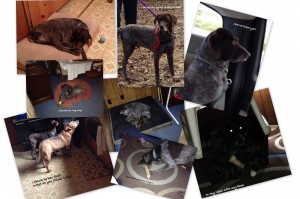 Hugh, now Bertie, also known as “Goldilocks” to his forever family, has hit the forever home jackpot. This shy boy’s personality has already started to emerge and his excitement and curiosity make him young beyond his years. He is already making himself right at home, sizing up each of the beds in the house as well as collecting his toys and secretly putting them in his “man cave” for safe keeping. His forever family and forever sister have given Hugh his own fairytale ending…or beginning!