Kasper was surrendered by his owners because he kept breaking out of his crate and escaping from the yard. He is a big, handsome, goofy guy who apparently felt he was not getting enough activity time. And he is strong—he even scaled a 10’ high wall in a doggie hotel! His foster family found him a bit standoffish at first, but he soon learned the ropes of living indoors with other people and dogs–and the occasional baby goat! (Thanks Catherine and Mac for fostering). When his first adoption attempt did not work out, he landed ‘temporarily’ at the home of our rescue group’s Executive Director. She and her husband fell in love with his energy, his Frisbee catching prowess, and his urge to curl his entire 70 pounds into their laps for cuddling. They could see he was the kind of dog who would blossom with consistent training and a LOT of exercise, so they decided to keep him. 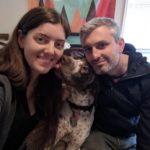