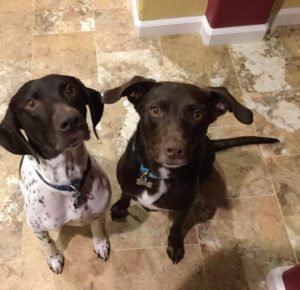 Brownie had a rough holiday last year. He was found tied up outside an animal control office on December 27, and was sent to an animal shelter. He had an extremely severe case of ringworm, so had to be kept away from other pets. Thanks so much to Sheri for taking Brownie on and seeing him through his treatments! When Brownie was finally ready for a new foster home, he was taken in by the folks who previously adopted alumni Camo. “Buster Brown” fit into the family so well, they decided to never let him go. This sweet, energetic, happy boy now has a permanent new home with a family that loves him very much.