You are here: Home » Archives for Tripper 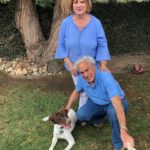 Tripper is a little guy who showed up at a shelter weighing just 45 pounds at around one year old. He stayed with his first foster family until they had to go on vacation. He went to a new foster home, with a couple who had raised and adored three GSPs previously—all bigger and browner than this new pipsqueak with his own quirky personality. In spite of having some pretty big paws to fill, affectionate and well-behaved Tripper won them over in less than a week. He demonstrated how much he craved their attention, how quickly he mastered new behaviors, and […]