Tony (now Georgie) was picked up as a stray just a few blocks from alum Kasper’s original home. They look so much alike, we felt sure they are siblings– and the DNA test confirmed it! Tony got to hang out with Kasper briefly after his freedom ride, but then a couple who are longtime volunteers and had recently lost their old GSP met him and agreed to foster. It wasn’t long before they were asking how they could make this sweet and funny dog a permanent part of their family, despite the wee adventure he had while they were both at work. He managed to escape from his crate, open a closed door, dive out a window and sli p through a gate! Thanks Lynn and Drew for fostering and adopting Tony, now renamed Georgie. 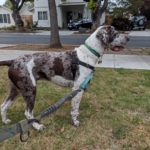 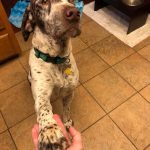