Bear’s owner reluctantly surrendered him due to sudden, unexpected life changes. The dog went from living in a home with a yard, two humans, and a canine sibling to long days alone in an apartment. He wasn’t happy and voiced his concerns, loud and long. Everything changed again when Bear came into our foster program. Initially, he appeared to be a crazy, untrained, separation anxiety-ridden GSP. Once he could decompress and relax, he became easy-going and independent. He got along well with dogs and kids. He showed off his solid training and was quick to learn new tricks. He caught the eye of adopters and now enjoys plenty of exercise with his parents and human brothers, days at the beach, and snuggling with his new Weimaraner sister, Coco. Thanks, Matthew and Amanda, and Anne and Brad (and GSP Brody), for fostering Bear. And thank you, Victoria and Paul, for adopting him. 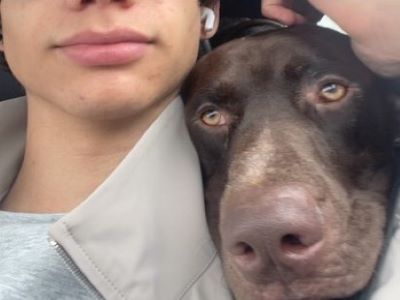