Some dogs (people, too) are too smart for their own good. Often bored, they turn into the class clown or a delinquent. That was our precocious Cassie–until she met Ron. Their first night together, she tried to take over the bed and he pulled out a Liza Doolittle quote: “Move your blumin’ arse!” She thought she’d be able to intimidate him, as she had most everyone else, but this guy pushed back. Cassie tried a few more of her best tricks, but none came out as expected. When she devoured a jar of peanut butter, Ron apologized for leaving it out to tempt her. When she stole a tool, he made a game out of the chase to get it back. He didn’t yell, he only laughed! He took her for walks at 4 am to explore the amazing smells at that dark hour. And when some scary dogs barked, Ron was calm and reassured her. Cassie decided Ron was a keeper, and that she could enjoy being a princess instead of a prankster. Thank you, Anne and Stephanie for fostering Cassie; and thanks, Ron, for fostering and adopting her. 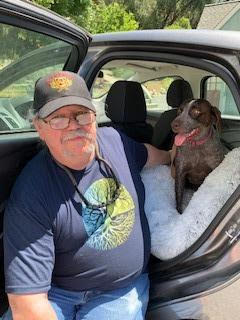