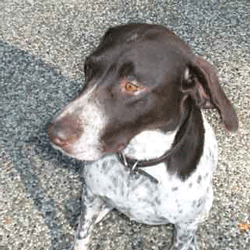 Dell‘s new family had seen his shelter posting, and were interested in him while he was still at the shelter. They decided to foster for us, and he fit into their family routine as though he had always been there! He has become pals with his GSP sister. They couldn’t imagine not having him in their family!