Oh how the life of Jeter (now Dieter) has changed! When his seizures became frequent, his owners surrendered him, because they could no longer afford his medications. One of our former adopters stepped up to foster him. Once his medications were adjusted, Dieter’s seizures stopped.

He fit in so well at his foster home—playing tug ‘o war with his pit bull sister Lilly, swimming and sunbathing with his elderly canine brother (alum Ace, now 17 years old and still enjoying the good life), and sneaking under the covers on the big bed for a good night’s sleep—they fell in love with him and decided he should never leave. Thank you Brandon and Richard, for fostering and adopting Dieter and providing him with a future full of squirrels to hunt, ocean waves to chase, sing-along opportunities, and road trips. 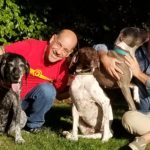