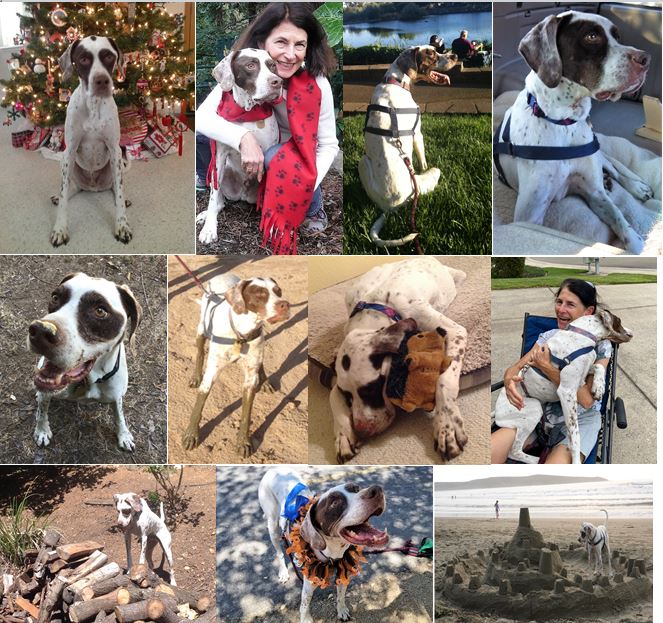 My dear, sweet Quixote crossed the Rainbow Bridge November 9, 2021. It’s two months later and my heart remains broken as I write his memorial.

I fostered Quixote in November, 2018. He was so scared, so sick and so stressed when I picked him up from the shelter – we had no connection at all. I remember thinking, “This is the worst decision I ever made”. Actually, it was the best.

Watching him blossom into a sweet, affectionate, obedient and confident dog gave me more joy than anything I can recall. NorCal GSP helped immensely with his medical challenges, but some were permanent. It didn’t matter to Oti – he was joyous to be alive.

No squirrel, mole or lizard was safe when Quixote was near. Hunting was an obsession, although he thankfully never caught anything! He was my personal trainer and we walked the wetlands for hours each day. He was the social butterfly of our neighborhood and trained my neighbors to give him cookies when he barked at their door. Oti was also the entertainer and comedian of the dog park. I don’t think a day ever went by that he didn’t make me laugh!

Most precious to me though, he was a snuggle bunny. He transformed from a petrified dog who wouldn’t even look at me in the shelter to my constant companion, an oversize lap dog who was glued to my side.

I had hoped to have many more years with him when he was suddenly taken. I still miss him more than words can say. His gentle spirit and comic character lightened my life and those of many around him. It gives me peace to know he’s doing the same up there at the Rainbow Bridge now.

Quixote, my good, good boy – you’ll always be in my heart.