You are here: Home » Archives for Harry 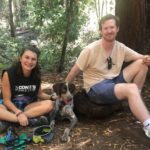 Five-year old Harry was in big trouble. He’d wound up in a shelter that was going to euthanize him. But then, everything changed. Three sets of volunteers formed a caravan to transfer him from central California to a Bay Area foster home, where he would be safe. At first, he sniffed every inch of that home—acting as if he had never been in one before. As he became accustomed to his new environment, he relaxed and began to let his amazing personality show. He was gentle and very intelligent, quickly learning new skills. He enjoyed going out with his foster family, but […]