You are here: Home » Archives for Rally 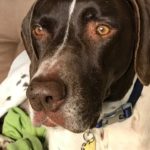 Those who have followed Rally‘s story will know that he has been a challenging boy to place. During his time in rescue, we’ve helped him with severe separation anxiety, some old hip and leg injuries, and a bit of a fugitive instinct. Thanks to our volunteers this time around (especially Anne), Rally learned to be a mellow guy. He finally found a home where he seems to fit perfectly, and is loved and appreciated as much as he deserves! He is the only pet on the rural property, so will have the full attention and devotion of his just-retired doting parents. Adopted February 2017 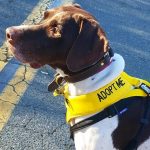 Rally (in green) spent his holiday getting in shape! He took on his first 5 K this year and loved it! 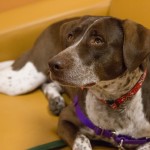 What a good girl she is. She went for her vet appointment and acted like such a little lady. 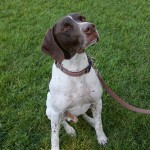 Rally has experienced quite the journey since we first rescued him from the shelter in March 2013. His journey has taken him to his perfect forever home, where he acts as a service dog for migraines. He’s having such success as a service dog, he and his forever mom will be speaking at a college about how to train service dogs. In this fantastic article, his new mom shares more about his amazing transformation from shelter dog to service dog: http://www.petjoyonline.com/kendall-and-service-dog-rally/ 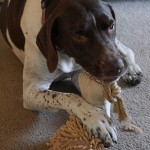 Rally met a new volunteer today and she brought him a new toy. Well, it was new for a little while! He had a great time with it, first carrying it around, then wrestling it to the ground (where it gave up), and finally knocking the stuffing out of it. Fortunately, Rally doesn’t actually eat any of the pieces, he just likes to take toys apart. He got the squeaker out in short order, and then enjoyed taking out the fluffy bits of stuffing. It also had lots of stringy things, each of which needed to be pulled and chewed. 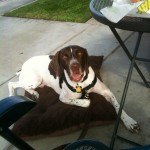 Rally is embarking on a trip down the California Coast, and he hopes everyone will follow along on his adventure! Did we mention how much Rally LOVES car rides? More info on Rally: http://norcalgsprescue.org/rally-our-foster-dog/ Day 1 Rally traveled from the San Francisco Bay Area down the coast to Santa Barbara. What a great time he had! Along with getting to add quite a few locations to his GSP-GPS navigation system, he also had a lovely outdoor lunch and got to meet several members of his fan club who thought he was a very handsome boy, and then had a close call […] 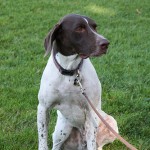 I had a great time with Rally at his photo shoot recently.  What a handsome boy – don’t you just love the puppy sit?  And what a lover!  He’s so interested in pleasing, and being near you, and if you have treats in your pocket – well, say no more, you’re his BFF for sure. It had been a while since I’d seen Rally, and the progress he’s made is striking. His foster mom has done such an awesome job with him, helping him get through surgery and some set backs medically, getting some weight on him (and wow, his […] 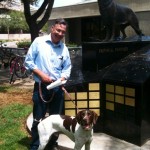 This past Monday, Rally returned to UC Davis Veterinary Hospital for his 6 week post-surgery check-up, following a major surgery to his right hip that had been causing him pain for far too long. The surgeon was incredibly impressed with his progress. A lot of his recovery is due to his weekly physical therapy sessions that have strengthened his leg and left him pain-free. It really is amazing to compare the Rally we met on his first day in rescue back in March and the exuberant, happy Rally that we see today. According to his foster mom, “he’s a completely […] 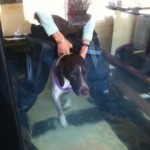 Rally started rehab a few weeks ago at Scout’s House. He is being such a star patient! His rehab therapists think he is going to make major gains in mobility over the next 6-8 weeks. We’re looking forward to watching Rally get better everyday. Check back soon for more updates on Rally’s improvement! 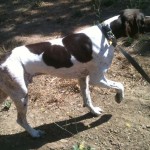 Rally at work, stalking the squirrels on the Stanford campus.               Rally at play, relaxing after a leisurely game of fetch. 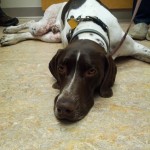 Here’s Rally putting up with having his sutures removed from his recent hip surgery. He received a clean bill of health from the vet. They are very pleased with his recovery and so are we! Rally will start on rehab next week and continue his road to a full recovery. Go Rally! 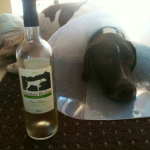 Rally had been having some trouble with his rear leg, and after tests and evaluations and x-rays, the experts determined that it was most likely disintegration around an old surgery site. Off he went to UC Davis for new surgery to repair the damage! Fortunately they were able to clean things up and he did not lose the leg. Here he is finally back home, relaxing with his cone and some Pointer Ridge Point Blanc wine. Oh, wait, sorry Rally, the wine is for your foster mom! 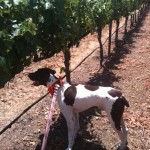 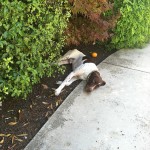 Rally loves to find a cool spot in the shade on a warm day. Seems like this patch of dirt fits the bill perfectly! 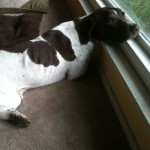 The life of a GSP is tiring work! Must…watch…for…squirrels…zzzzzzzzzz