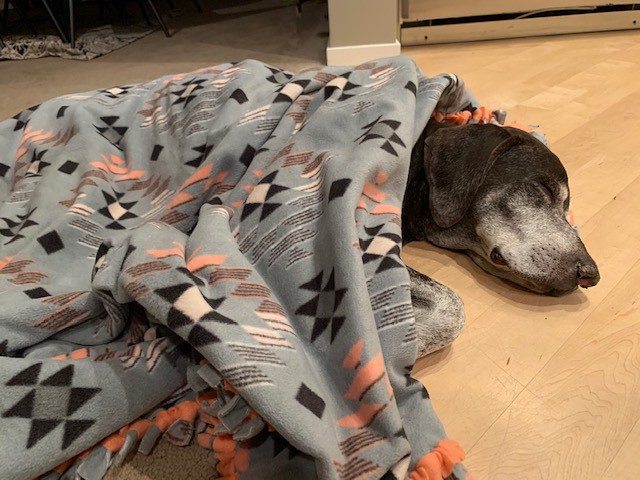 His name was Hunter but I couldn’t help but think of the old dog in Lady and the Tramp, Trusty; the way they had the same pride in their stride despite their age and fading health, so the name stuck. Trusty (aka Rusty Trusty) was a little shy at first so he stuck to me and we became fast friends. He always wanted to be with people and would howl when left alone. He didn’t hear or see well, and the poor guy was in a lot of pain from rotting teeth in his mouth. NorCal GSP was generous to pay for 2 surgeries to get them out, afterwards, he had an extra bounce in his step which was a joy to see. He was such a good boy and he must have been stunning in his prime because he was a looker even at 16! He loved sunbathing and his walks. He would pull on the leash like crazy to the point that I called it “Trusty time” because he was setting the pace! He had great spurts of playfulness but mostly, he was my mellow “man of the house” and became my constant companion. Trusty completed my family of four (me being the only one on two legs). He passed on a sunny day under some oak trees while I held him. It was a sad and sudden loss but his body failed him after a long 16 years of life, but it was just his time to cross the rainbow bridge. I only knew him for the last 6 months of his life, I can only hope that someone else loved him before he came to me. I am lucky to have had the opportunity to make is last chapter a happy one. He will be missed.