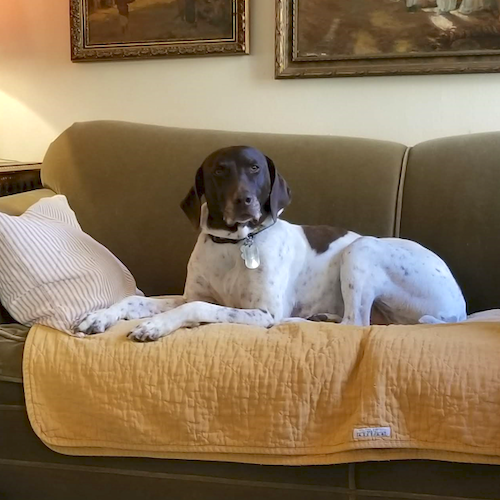 When we read Dieter’s (formerly Jeter) story in September 2014, we knew we had to immediately foster him. At the time, we had two other dogs. Our senior NorCal GSP Rescue, Ace, who we adopted two years prior at 13, and our rescue Pitbull, Lilly.

Dieter was brought into rescue because of a very sad story. He was ten years old and started to suffer seizures. Apparently, his former owners were unable to properly care for him and he was surrendered to rescue.

When we went to pick him up, just one look and we knew that we wouldn’t be fostering him, we immediately decided he would be part of our family. Once home, he immediately bonded with our other dogs and then we had three. Dieter loved to take his toys and bones and bury them in the yard, surf the sofa and cuddle in bed. He was just a total sweetheart!!! This boy also LOVED to eat and was obsessed with vegetables. Our compost bin was always empty because there was no stopping Dieter and his veggies. Our first canine herbivore!!!

With regular veterinary care and proper medication, Dieter was 100% seizure-free for the first three years and enjoyed every single day. While we were able to adjust his medication, over the next two years, they became more and more frequent and after each episode, he became weaker and weaker and ultimately his quality of life was diminished and we lost him last month.

While we mourn his loss, we are thankful for NorCal GSP Rescue for bringing him into our lives and are forever grateful for everything that you do!!!

Posted in In Memoriam